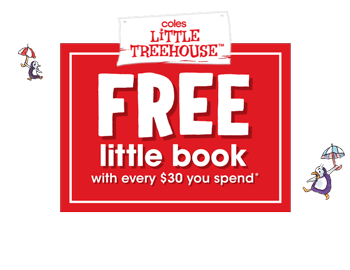 There are 24 Little Treehouse books to collect - get collecting today!

*Simply spend $30 in one transaction at Coles or Coles Express and receive a Coles Little Treehouse book! Offer ends 22 September 2020 or while stocks last. Exclusions, terms and conditions apply of course - you can view those here.

What's better than a mini book? Our wild and wacky miniature bookshelf display of course! Get clicking and explore the wacky characters, Stig Wemyss' famous audiobooks, or simply have a chuckle at our chuckle-worthy activities!

Click below to explore all Coles Little Treehouse books

Swipe below to explore all Coles Little Treehouse books

Create your own book and WIN!

Are you Australia's most creative and imaginative author and illustrator? Submit your own amazing little book for the chance to win a share in hundreds of prizes! With every entry, we'll donate a book to the Indigenous Literacy Foundation. Competition ends 30/8/20. Limit of one entry per person. Open to Australian residents 3-18 years of age. A signed consent form must be submitted for participants under 18.

See (and hear) your favourite Coles Little Treehouse books come to life in these fun audiobooks!

This book is called The Flying Dot.

If you're like most of our readers, you know that Terry can draw pretty much anything, but you're probably wondering what he likes to draw most. Well, that's easy. Dots. I like dots.

Terry can do a lot with dots. He can turn them into holes, eyeballs, dot air balloons, pumpkins, drots, and escape hatches. Does a lot with dots, Terry does.

Terry likes dots, and that's no lie. One day, he drew one that could fly. So I jumped on and Jill did too. Terry said, "Go." And away we flew. We flew up high. I can't breathe. We flew down low. We flew fast. Vroom. And we flew slow. Honk Honk.

We saw a beautiful beach below. The sea was blue. The grass was green. It was the nicest beach we'd ever seen. We landed our dot, beneath a tree. Where we saw a picnic set for three. We sat right down and started to eat, but a big loud splat made us jump to our feet. "Oh no", I said, "it's a splat in a hat." The picnic for three was just a trap.

We were covered in splats from top to toe. "Come on," I said, "let's go, go, go. Before splat can splat us some more." We ran to a house and banged on the door. The door opened wide and two children cried "Quick. Come in here. You can hide inside." "Thanks," we said, as we ran on through, but the splat was too fast and it got in too. Quick splat that splat.

"Don't worry," said Terry, "I know what to do. I'd like you to meet Dot One and Dot Two. There’s the Dot one and there’s the dot two.

This is Dot two and that’s Dot one, and gobbling up splats is how they have fun. These D splatting dots eat splats for lunch and breakfast and dinner and snacks and brunch."

Terry released Dot One and Dot Two. They went straight to work and knew just what to do. They bit and they munched. They chomped and they crunched. They gobbled and they gogged and splurged chomp chomp.

And every so often they stopped all their chewing and very loudly, they burped. Burrp. Naughty dots burping.

They de-splattered Terry and Jill and me. And in no time at all, we were all splat free.

The splat in the hat began to cry. A big fat tear rolled out of each eye. Oh no. The splat is really sad.

"My splats, my splats," cried the splat in the hat.

And that was the end of the big, bad splat. And all that was left was the dotty old hat.

Instantly win one of millions of prizes

Climb through treetops on an outdoor adventure, or stay in a tree house for a weekend, plus more! Purchase 3 participating products in one transaction to win instantly. FYI, these FAQs have been written with some help from Madam Know-It-All, but if you have any other questions, please contact our Customer Care Team.

Coles has partnered with much loved authors Andy Griffiths & Terry Denton to bring the characters from their hugely popular the Treehouse book series to life in 24 free Little Treehouse books.

You receive one Little Treehouse book for every $30 spent in one transaction at Coles, Coles Local, Coles Online (maximum of 20 books), and Coles Express. That is, if you spend $90, you will receive three Little Treehouse books. The Qualifying Spend is calculated after applying all savings and discounts and excludes the purchase of: Coles Insurance products, iTunes cards, gift cards, mobile phone and mobile phone plans, recharge, calling cards, Opal top up, liquor, tobacco and tobacco related product purchases, Uber Eats, eBay, AdBlue, Trailer Hire and Lottery cards.

Fuel at Coles Express is included in the qualifying spend.

There is a total of 24 regular Little Treehouse books, each focusing on the story of a different character from the Treehouse series. There are also three rare Fluro books: FLURO PURPLE Inspector Bubblewraper’s DOs and DON’Ts; FLURO PINK Jill’s Little BIG Book of Animals; and FLURO ORANGE Mr Big Nose. Then there is the SUPER RARE Golden Treehouse Tour.

If you find one of the 100 Golden Treehouse Tour Little books, you are eligible to win a personalised GOLDEN copy of the (yet to be released) 130-Storey Treehouse, and a Kobo Libra H2O eReader. If you find a leaflet in your Golden Treehouse Tour, follow the guide and enter your unique code on coles.com.au/littletreehouse. You must keep your leaflet to claim your prize. More details on the competition can be found in the Terms & Conditions on coles.com.au/littletreehouse.

The Golden Treehouse Tour book is randomly mixed in with all the Little Treehouse books so customers will have the chance to win the rare book when they spend $30 in one transaction at Coles Express.

Each Little Treehouse book is sealed in a non-transparent pack. Coles Little Treehouse as a campaign is modelled on a ‘lucky dip’ blind selection process, with this built in at point of production.

Coles Little Treehouse launches on 29 July 2020 and will run for 8 weeks or while stocks last.

Eligible free Little Treehouse books will only be provided by Team Members when the you have completed your transaction and you’re still in the store. Mr Bubblewraper says DO! Collect in store. DON’T! Forget to collect!

Unfortunately, orders placed before the 29th July will not contain any free Little Treehouse books.

Yes! The Little Treehouse wrappers are made from responsibly sourced (Forest Stewardship Council (FSC) certified) paper and are fully recyclable through your kerbside recycling bin at home.

Yes, the Little Treehouse books are also made from responsible sourced (Forest Stewardship Council (FSC) certified) paper and are fully recyclable through your kerbside bin at home. However, we recommend that you keep them on your bookshelf or in the album for years of reading and enjoyment to come. Mr Big Nose would want that too, and it’s best to not make him angry!

From Coles Supermarkets and Coles Online, you can purchase the Coles Little Treehouse Collector Case, as well as all the books from Andy & Terry’s Treehouse book series:

Please reach out to us seven days on www.facebook.com.au/coles or contact our Coles Customer Care at Call 1800 061 562 Mon–Fri 8.30am–6.00pm (AEST) Saturday 8.00am–4:30pm (AEST) Sunday 10am-5pm (AEST), they we be able to assist with locating a store near you with additional stock of any of the Coles Little Treehouse items. Hopefully Professor Stupido hasn’t Un-Invented any…

The Coles Little Treehouse books are not suitable for children under 3 years of age. For safety reasons, remove all packaging before giving to children. All Coles Little Treehouse books have passed the following Australian test standards. These tests have been independently run by Intertek, a world leader in testing of product including toys, providing a broad range of services to clients around the globe. Their laboratories have gained international accreditation from all relevant accreditation bodies and industry associations, helping retailers like Coles reduce risks and demonstrate the quality and safety of materials, components and products.

Unfortunately, we cannot provide donations of the books during the program, though please do reach out again after 22/9/2020 and we will endeavour to donate any remaining Coles Little Treehouse books.

Coles is looking for Australia’s most creative up-and-coming author and illustrator, with some fantastic prizes to be won for you and your school! To create your own storybook and enter the competition, get started here. Andy Griffiths (THE Andy Griffiths) will be judging the winners and selecting the top five entries!

The top 1-5 entries will win a $1000 gift card and 1000 books for your school library, plus a bespoke 13-Storey Treehouse with YOU drawn on the cover by Terry Denton (THE Terry Denton)!

EVERY entry into the writing competition equals one new book donated to a school in an Indigenous community that needs it via the Indigenous Literacy Foundation.

The purpose of the Indigenous Literacy Foundation is to make a difference to the lives of Indigenous families by not only gifting thousands of new culturally appropriate books – with a focus on early literacy and first language - but also by running programs to inspire the communities to tell and publish their own stories. They work in over 400 remote communities across Australia. For more, visit https://www.indigenousliteracyfoundation.org.au/